The infamous DC snow hole struck again yesterday – place south of us got snow and places north of us got snow, but we just experienced dark skies and the threat of snow. Many local meteorologists were declaring this storm to be the last for the area before the promised spring-like weather.

Because yesterday was cold, gray, and damp – despite nothing falling from the sky – it made me think of some of our favorite trips to tropical destinations. St. John is definitely on the highlight reel – Clay and I went there, sans kids, in August 2014. The highlight of our vacation to the USVI was easily our time spent on St. John. When planning the trip, we ultimately decided to stay on St. Thomas because we managed to score a great rate at the Marriott. And we really did have a fantastic time on Rock City. But St. John is in a different league all together – we knew we would love the island but we didn’t expect to fall as hard as we did. St. John is known as the crown jewel of the Caribbean and I can’t think of a more deserving title for what just may be the most beautiful place we’ve been to yet (for inquiring minds – Alaska, Scotland, and St. John are the frontrunners but we still have so many more places to go).

Because St. John has no airport, it is only accessible by boat. We hopped an early morning ferry that left from the Marriott dock on Pacqereau Bay that was actually meant for a sea and land tour group going to St. John. We paid the discounted rate and made plans to breakaway from group as soon as we hit land. I did manage to accidentally insult the tour guide when she tried to convince us to sign up for the land tour but c’est le vie. We did enjoy the Captain’s commentary on the ferry ride over and learned quite a bit about USVI history and we can now boast that we know where a world famous arms dealer resides. 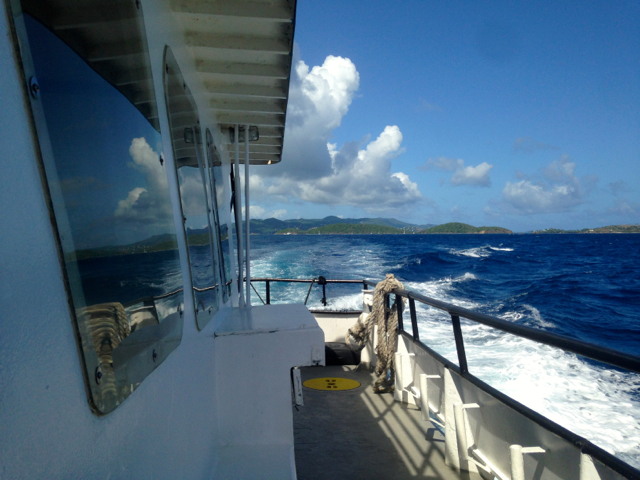 The ferry took only about 35 minutes to get to Cruz Bay, St. John. 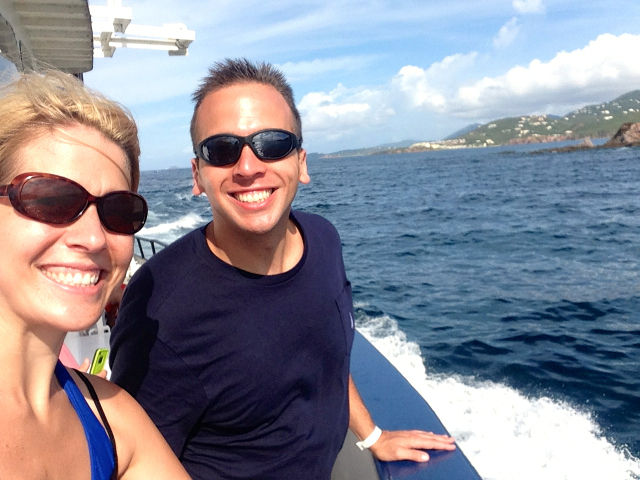 St. John is unique because 60% of the island is National Park. Under the condition that it be protected from future development, Laurance Rockefeller donated the majority of his land to the National Park Service in 1956. Additionally, most of the water, coral reefs, and shoreline are also protected and considered part of the Virgin Islands National Park. 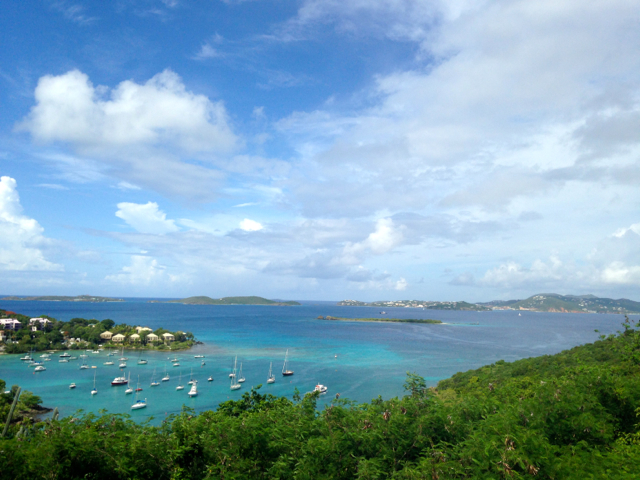 Our ferry docked in Cruz Bay, the main town on the island. Once off the boat, we hopped on an open air safari taxi and made our way to fabled Trunk Bay. We shared the taxi with a local who literally gushed at how St. John is an amazing island and gave us some pointers on places to go that are off the beaten path.

Our drive to Trunk Bay took us past the famed Caneel Bay and namesake resort.

We saw many beautiful bright roosters walking along side taxis on the road. 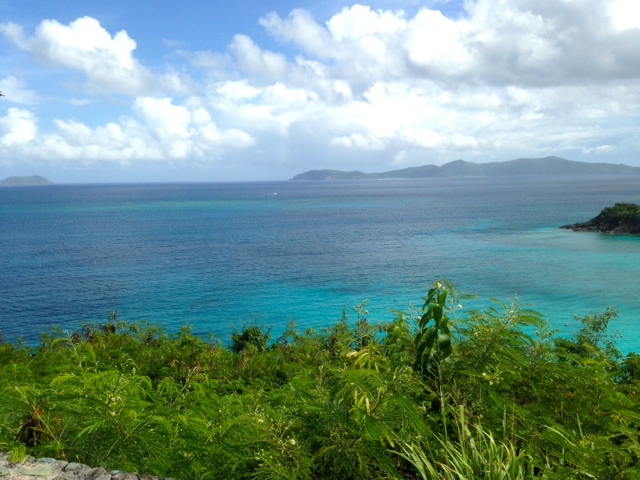 Seriously – the views on the island are absolutely insanely gorgeous.

Trunk Bay is perhaps the most famous beach in the Caribbean. Given the title of Most Beautiful Beach in the World by National Geographic Society, Trunk Bay is home to the underwater coral reef snorkeling trail, the most crystal clear water in which we’ve ever swam, and a brilliant white sand beach. 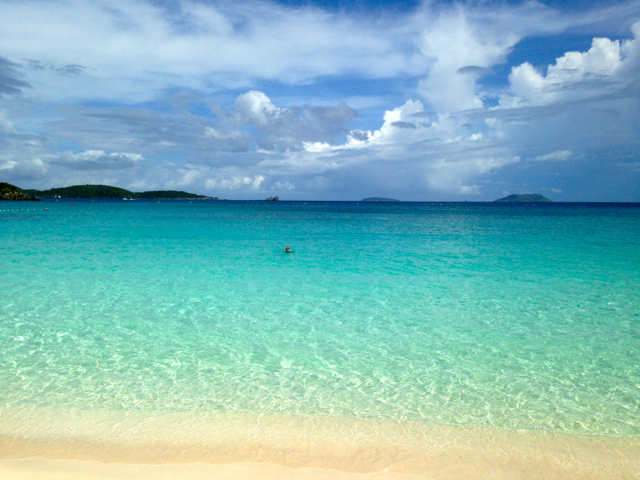 There is a small fee to get on the beach (staffed by the National Park Service) but it was well worth it. It felt like we were existing within a postcard. The weather couldn’t have been more perfect and we spent the morning swimming and enjoying being one of only about 10 people on the beach. We didn’t get a chance to go snorkeling along the underwater trail but we are planning on doing so during our next visit (there will be a vacation to St. John within the next couple of years). The pictures to not do Trunk Bay justice. It is simply more magnificent than you can imagine.

After Trunk Bay, we took a taxi back to Cruz Bay and found The Tap Room, home of the St. John Brewers. 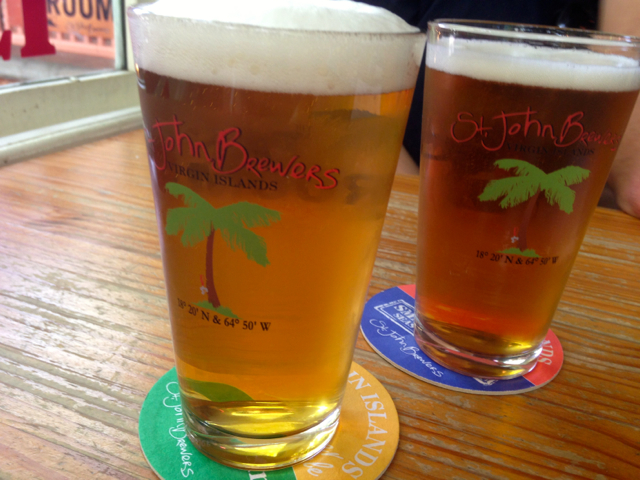 We shared pork nachos and enjoyed beers while chatting with one of the owners. He is from Northern New York and decided to immediately move to St. John after visiting and wanting a more simple life. We weren’t surprised in the least because our new post-Army retirement dream? Move to St. John.

Four beers later, we were ready to hike in the National Park. Don’t worry, we also had plenty of water!

We took the upper trail and enjoyed hiking along the slightly rough terrain. During our hike, we didn’t encounter one other person on the trail – absolute perfection. 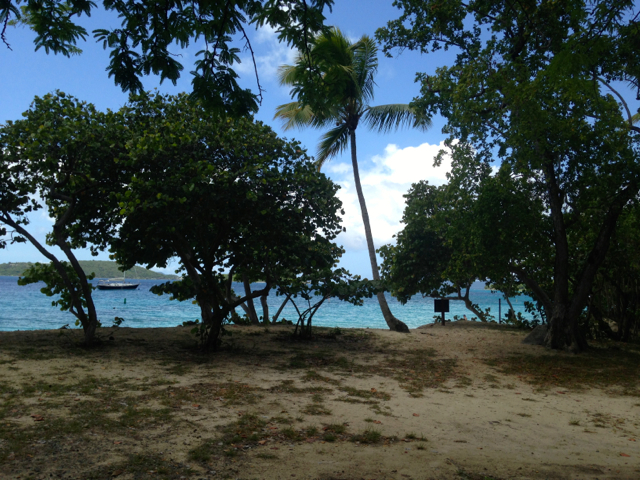 Honeymoon Beach is only accessible via boat or the trail we hiked. It was particularly hot that day so we immediately jumped in the water and soaked in the view. You can see most of the islands surrounding Pillsbury Sound from Honeymoon Beach – including Jost Van Dyke, one of the British Virgin Islands. Impressive sailboats were anchored in the water and only added to the view.

And before long, it was time to hike back to Cruz Bay so we could catch our ferry back to St. Thomas.

We only spent one day on St. John – not nearly enough time. But we will be back – that’s for sure.

We enjoyed complementary rum runners on the ride back to St. Thomas and brainstormed ways to make living on St. John a reality (let’s just say they became more outlandish as our glasses were continuously refilled).

5 thoughts on “St. John – The Crown Jewel of the Caribbean”

Emmaus, Pennsylvania is such a cute little town! Good drinks and good food! #yergeybrewing #theburgercompany
After spending the night in a cheesy hotel room (e.g. heart-shaped jacuzzi), I was able to do some early morning skiing with my favorite person. Who would’ve thought - skiing without the kids is a whole lot easier. 😂#poconosmountains
Last night, we drove up to the Philly area to Megan and Mike’s. This morning, we hit up Jack Frost. And this afternoon, Megan and Mike took the kids back to Philly so Clay and I can spend the night in the Poconos. #1970shoneymoon 😂
@clay_clay_clay - you’ve had my heart for almost 19 years. Thank you for being my forever Valentine, my biggest cheerleader, and making me martinis on a regular basis. ❤️ 🍸 🏔
I started running again last week and my leg feels great! I tend to downplay a lot of things that happen to me but slicing my leg down to the bone could’ve ended so much worse and I am so incredibly thankful that my body was strong enough to heal...all the more reason to run. #noexcuses
We were craving Korean food, so we went out to dinner in downtown Annandale, which is also known as Koreatown because there are roughly 1000 Korean-owned businesses within a small radius. We love living in such a diverse area and we’re happy that the Army is send us to another diverse area this summer known for it’s ethnic food. And who knows? Maybe someday the Army will send us to Korea. #koreanbbq #hotpot #annandale
While it isn’t always peaches and cream, having them call each other their best friend gives me all the mom feels. 😍 #sibling #brothersisterlove
One last visit with Mickey before heading home. ✈️ #disneyworld2020
We closed out our last day in the parks with a fantastic dinner at Teppan Edo in EPCOT. It’s been a good trip. #waltdisneyworld