A couple of weeks ago, I shared on Facebook about how we met a fellow military family PCSing to London in the Centurion Lounge at the Philadelphia airport. We had just arrived from Charles De Gaulle and they were en route to Heathrow. In the handful of minutes that our time overlapped, we discussed topics such as the Army, various duty stations, and the joys of traveling with kids. Clay and I talked about our brief time in London and just as they were gathering their belongings to catch their flight, we remembered the Oyster cards still in our wallets. We handed them over – happy the little money left would be used sooner rather than later and hopeful that we made one step of the stressful PCS-process just a little bit easier for them. I’m not going to lie – I was a little sad to pass my card along because it meant that I wouldn’t have a need for it in the near future.

I fell hard for London. And I know there will be a time in my life where I’ll permanently have an Oyster card in my wallet because I’ll be in the city enough to justify doing so. But until then, I’ll think back on our quick trip to London and marvel at the city that managed to beautifully combine old and new.

When planning our trip, we decided to return our rental car in the heart of London, rather than Heathrow Airport, because we wanted to save ourselves time and hassle. The drive into London wasn’t horrible and the traffic wasn’t anything we haven’t experienced in downtown DC during rush hour. Next time, we won’t hesitate to utilize Heathrow as a jumping off point because we know understand just how easy it is to navigate around London and its suburbs. But at least now we can say that we’ve driven in downtown London and even paid the congestion charge of £11.50 for the privilege of doing so.

Where we dropped off our rental car was about 2 miles from our hotel in Hyde Park. The kids really wanted to ride in a Hackney carriage (the quinessential London taxi) so we hopped in one and marveled at the city through the iconic rear windows on the way to our hotel.

So let’s talk about our hotel. First – we couldn’t have asked for a better location. We were a short walk from Paddington Station, Hyde Park was around the corner, and there were plenty of restaurants and shops right outside the door. However – of the three places places we stayed this trip (Bourton-on-the-Water, London, and Paris), this was by far the worst accommodations on the trip. The room was small (understandable…it’s London!) but it was also not terribly clean nor was the furniture in good condition. It wasn’t bad enough for us to go through the hassle of changing hotels but we will not stay there again when we go back to London.

After checking into the world’s tiniest family suite, we walked down to The Victoria for drinks and a late lunch (pictured are fried pickles). We ate in the library and thumbed through the London guide books available for reading and planned the reminder of our day. After lunch, we hopped on the Tube and down to Westminster. 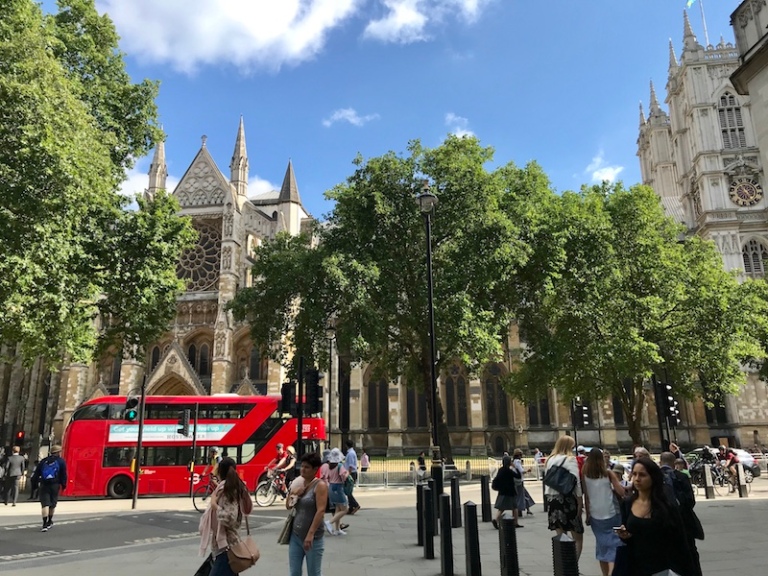 We spent the rest of the afternoon walking around and enjoying the energy of London. 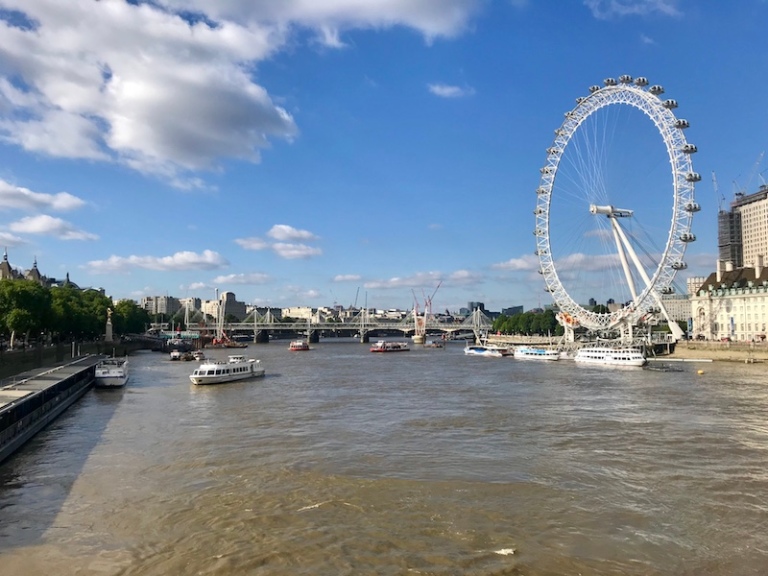 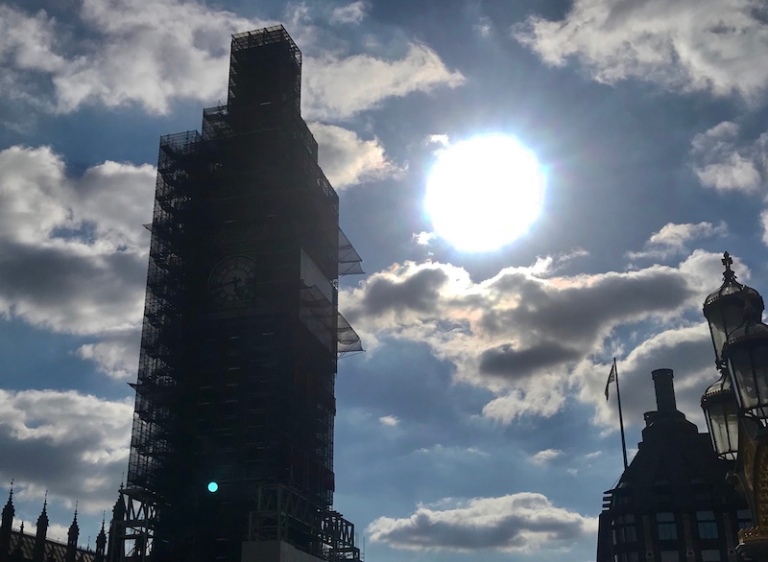 Much to Weston’s dismay, Big Ben is under restoration until 2021. We were disappointed but we all agreed that this just means we will have to book another family trip to London in 2021.

We walked from Parliament Square to Buckingham Palace through St. James Park and stopped to let the kids play on a playground.

We grabbed drinks and cookies (biscuits?) from one of the many concession stands throughout the park and then wandered around Buckingham Palace.

By 7pm, we were ready for dinner so we hopped on a double-decker bus (on the same card system as the Tube) back to our hotel. We spent the next few hours wandering around the streets near our hotel and grabbing a bite to eat. All of the pubs were packed full of patrons watching the France/Belgium World Cup Semi-Final so we settled on an unremarkable restaurant that was just okay. By the time we returned to our room at 10pm, we were ready for bed because we knew we had a full scheduled the following day.

Sadly, the iconic Red Coat regiment was on block leave (ironic – right?) so the changing of the guards didn’t pack the typical pizazz (sorry Royal Air Force). That being said, it was still quite the spectacle and a nice way to spend the morning.

Afterwards, we hoped on the Tube and went to Regent Street for what the kids now refer to as the highlight of London – Hamleys Toy Store. Back when we took the kids on their inaugural trip to New York City, the flagship FAO Schwarz Toy Store on Fifth Avenue had closed its doors the year prior, which crushed me – there is just something so special about going to a giant toy store in a big city as a child. One of my favorite memories of my first time in New York City as a kid was experiencing FAO Schwarz – completely in awe of the seemingly endless floors of toys. 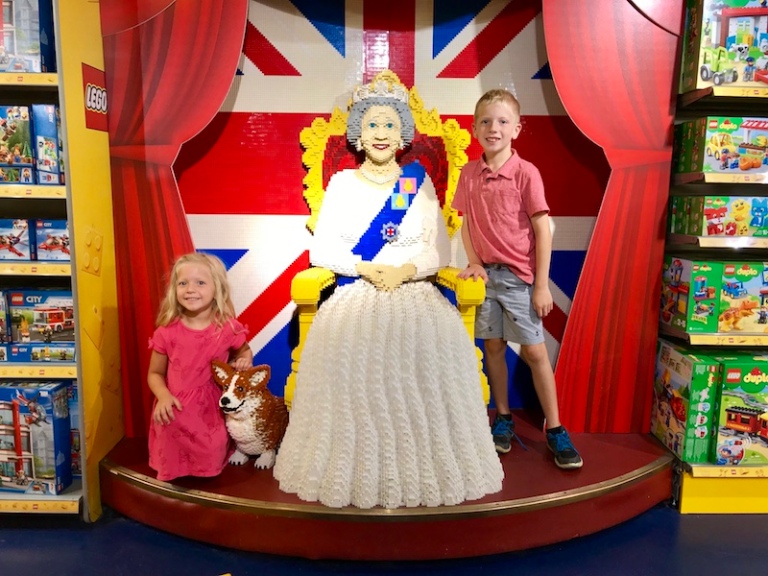 Hamleys is the oldest and largest toy shop in the world. It was founded in 1760 and moved to its current location on Regent Street in 1881. We spent almost two hours exploring the shop and even managed to pick up a few small things to take home with us. We grabbed a bite to eat at a fantastic pub and then took the Tube down to Tooley Street.

We walked along the River Thames, saw City Hall, grabbed coffee at Hay’s Galleria, saw HMS Belfast, and gazed at The Shard and The Gherkin.

We continued along the river Thames toward the Tower Bridge. 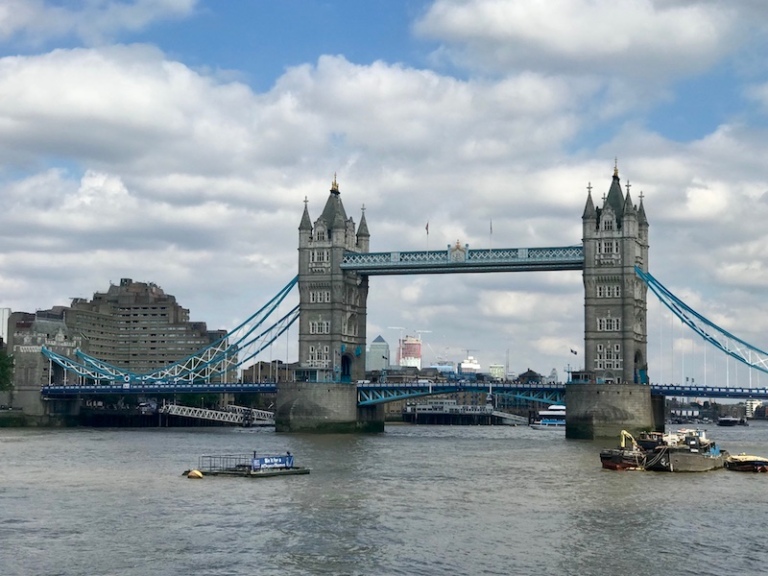 By the time that we made it back to the Hyde Park neighborhood, the World Cup semi-final between England and Croatia had begun so every single pub and restaurant looked like this one next door to our hotel.

Because the television set was broken in our room (sigh) and the odds weren’t in our favor to actually grab a seat in a pub with two children in tow, we opted to walk around Hyde Park during the bulk of the match. 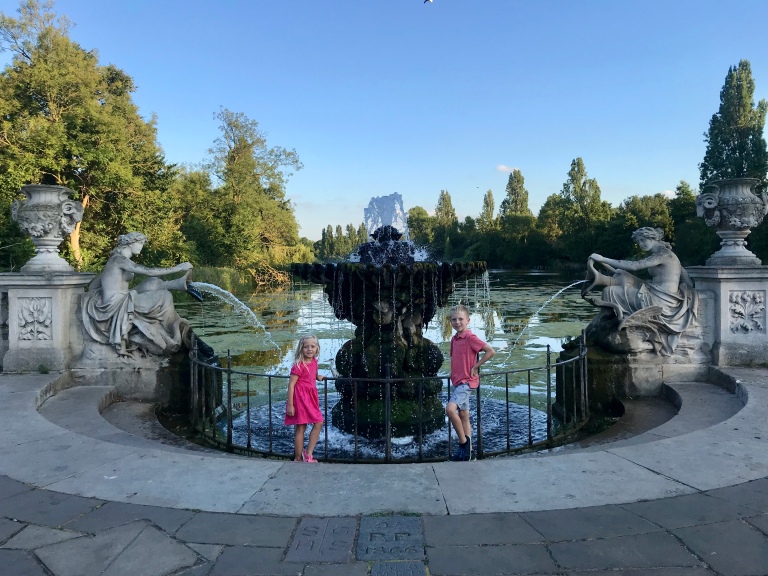 Hyde Park is the largest of the four Royal Parks, established by Henry VIII in 1536.

We walked by Kensington Palace – I had no idea that so many members of the royal family lived there. A quick Google search also verified that with enough money, commoners like us can live there too!

We walked all around the grounds that surround the Palace. We fed swans, we had birds chase us, we visited the Princess Diana Memorial Fountain, and we even found a little playground for the kids to enjoy (the Diana Memorial Playground had already closed by the time we came across it). 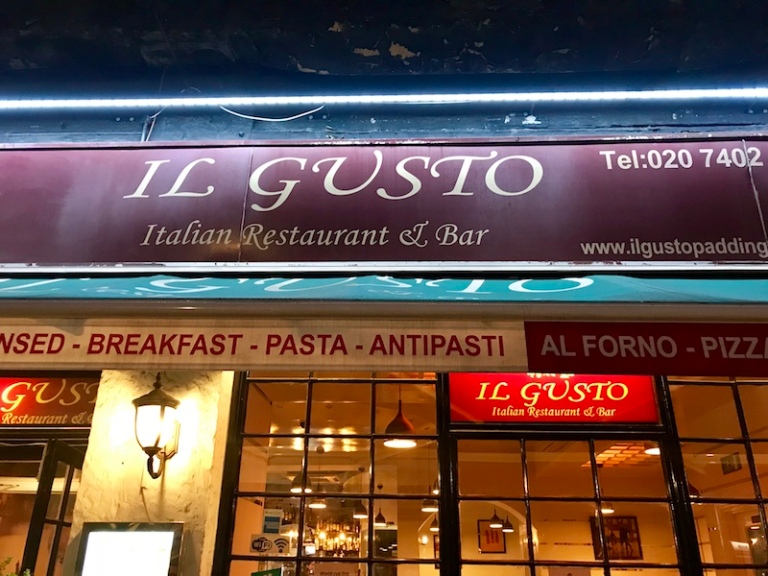 We walked back toward our hotel and came across this fantastic little Italian bistro. We were hungry and wanting to watch the last of the match so we popped in…we are so glad that we did. We all agree that it was our best meal in London. The proprietors were warm and friendly, the food and wine was absolutely delicious, and we were able to watch Croatia win over England. It was almost 11pm by the time we got back to our hotel.

The following morning, we packed up our bags, made our way to St. Pancras station, and boarded the Eurostar. Next stop – Paris!

This is 38. The past year was filled with personal and professional triumphs as life changed into a shell of what we’d previously known. There were a lot of lessons - many difficult to digest. But I emerged better than before. Only time will tell what the next 365 days have in store for me but all signs are pointing to the spring and summer being the best yet. 💪🏻 #moveyourbody #breakasweat #letsgo #brighterdays #birthdaygirl
The @chicagotribune had a column today about apricity, a rare word that means the warmth of the sun. It has been a gorgeous weekend with above average temperatures so we’re spending as much time outside as we can. I can’t wait to see what spring will bring. 😍
It was too warm to ski today (we’re NOT complaining) so we opted for a hike in the woods instead. #optoutside🌲 #winterhiking #snowhike
Better late than never. Taco trio from last weekend - the fish taco was my favorite.
After a bitter cold and snowy February, we’re ending the month with unseasonably warm temperatures and melting snow. #lakemichigan #thirdcoast #sunset
Teddy Girl sure does love being stationed on Lake Michigan (so do we!). ❄️ #labsofinstagram #puppiesofinstagram
I am my own worst critic and have been known to put mind-numbing pressure on myself to accomplish things that don’t matter much at all in the long run. I wrote about how my body told me that I needed to slow down but I know that is easier said than done (link in bio). Does anyone else out there struggle with feeling like they’re not living up to their potential? #listentoyourbody #strugglebus #brighterdays
It’s a cozy Friday night around here. #bff #animalsonfurniture
🎶 It’s beginning to look a lot like Fort Drum, everywhere we go...”. The drifts are taller than us! #chicagolandwinter #winterwonderland