Disneyland – The Happiest Place on Earth

Last year’s Spring Break involved an epic road trip across the southwest with stops in Albuquerque, the Grand Canyon, Las Vegas, Disneyland, Tombstone, and more. That previous fall, when brainstorming ideas for our spring adventure, we realized that we had reached the point in our parenting journey when taking the obligatory family Disney vacation no longer seemed like an overwhelming feat of strength. While my childhood was peppered with the occasional visit to Disneyland and Disney World, Clay had never been to a Disney park prior to this trip and we had never been together, so the only experience we had to pull from was almost 20-years old! Because we’re suckers for California and appreciate the idea of working our way up the Mickey-scale, we decided to make our first family Disney experience at Disneyland – the happiest place on earth. 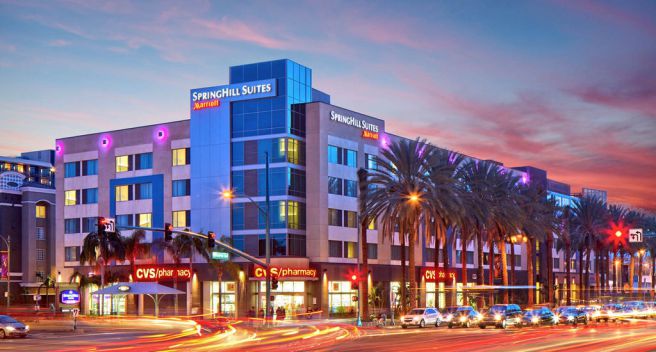 What I knew as Disneyland as a child has actually morphed into Disneyland Resort, which consists of Disneyland Park, Disney California Adventure Park, and the Downtown Disney District. There are three hotels that are considered part of the resort (complete with the $$$ mark-up!). And honestly, the only perk of staying at one of these hotels (that we could gather), is that registered hotel guests are given an Extra Magic Hour at one park on select days (see Extra Magic Hour), which wasn’t worth the extra $$$ to us. There are a lot of hotels within walking distance of Disneyland Resort, so while staying on property is super convenient at Disney World, it’s not really necessary at happiest place on earth. We’re Marriott junkies so we stayed three nights at the SpringHill Suites, which was only a short 10 minute walk to the park. And it had a CVS on the first level – doesn’t get much more convenient than that, folks. 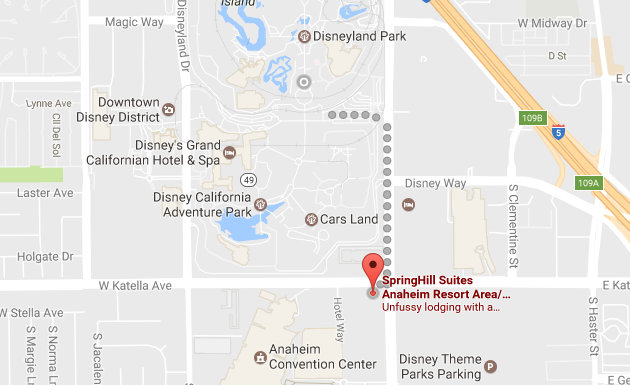 Because of the short walk to the park, we were able to go back and forth to the hotel as necessary throughout the day. While we’ve been out of the napping kids game for awhile now, we all appreciated heading back to the room for a couple of hours each afternoon just to relax and regroup before heading back out for the evening/night. The hotel was nothing fancy but it got the job done. We were in a suite, so after the kids went to bed, Clay and I were able to enjoy cocktails and watch television without disturbing them and we had more than enough room to kick-back and relax during our three days there.

We checked into our hotel on a Monday afternoon with plans to be at the park on Tuesday, Wednesday, Thursday. We couldn’t have planned it any better. On Monday night, we walked down to the Downtown Disney District for dinner and bought the kids the ever-famous mouse ears. And then we went to bed with plans to wake-up early and see what all the fuss was about at Disneyland. 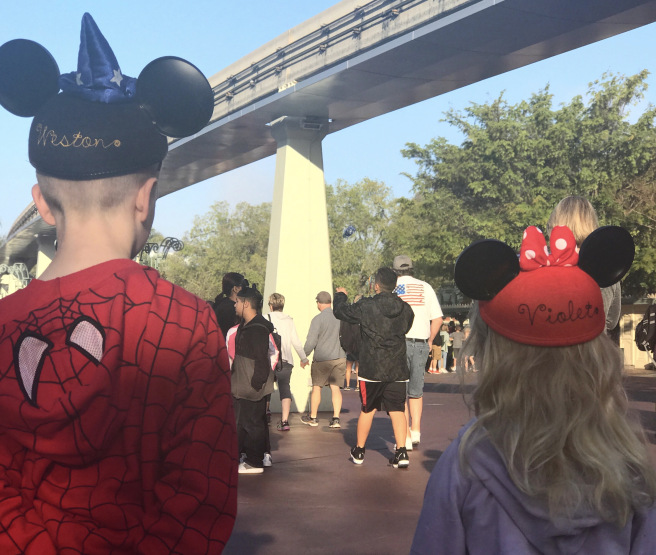 So let’s talk Disney. Long story short – we didn’t really consider ourselves ‘Disney People’ prior to this trip. We were looking forward to our visit but Clay and I had a “we’re doing this for the kids” mentality. But you know what? WE LOVED IT! I seriously think Clay and I may have enjoyed it more than the kids. It was truly a magical family trip. Prior to Disneyland, we assumed that this would be our only visit and then we would go to Disney World a few years from now in order to ‘check that box’ but now we’re wondering if we need to go to Disney World sooner rather than later because we had such a fabulous time. It wasn’t peaches and roses 100% of the time but it was pretty darn close.

We were thankful for Disneyland Resort offering a Military Three-Day Park Hopper Pass for $156/person and we were blown away by the sincerity of the gate-keepers offering their thanks to Clay whenever we entered the park. One thing we noticed was how efficient the security lines and entrance lines were at Disneyland – they took an unpleasant experience (entrance lines into theme parks) and made it as pleasant as possible. All of the staff was friendly, smiling, and committed to ensuring that every one had a magical time.

The very first ride we went on was Star Tours. It was one of the rides that I remember most as a kid because shortly after it opened, my dad took me on it (I barely hit the height requirement) and I had an epic freak out because I thought we were really going into space. Star Tours was the perfect first ride – we had a blast and seeing our kid’s reactions to flying through space was something we’ll remember forever. Violet was exactly at 40 inches on this trip so there were only a handful of rides that she couldn’t go on….she went on everything else, including Splash Mountain and Space Mountain! 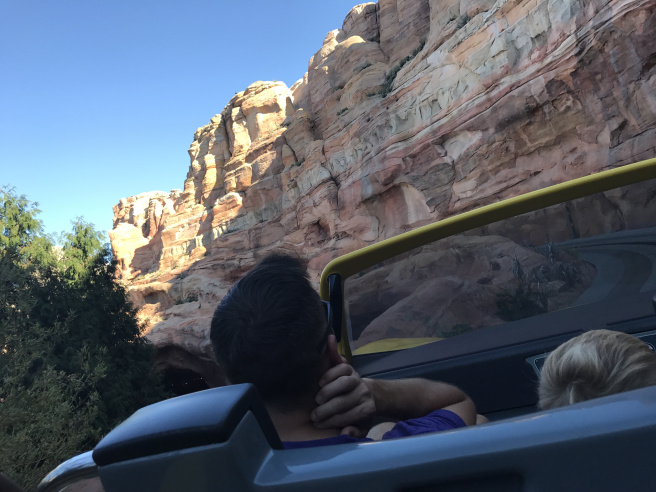 Disneyland doesn’t have the Magic Bands like Disney World, so FastPasses are issued via paper vouchers. We found the system very easy to use and we were able to ride every single ride we wanted to without having to wait too long at all. The park was busy but the longest we waited for a ride was 40 minutes and that was for the Toy Story Midway Mania at California Adventure – FastPass isn’t offered for that ride yet (only 15 rides offer FastPass). We were at the park for three days and we rode every single ride we could, we certainly didn’t feel like we just waited in lines all day. We also took advantage of the Disneyland Mobile App, where we could track ride wait times, character locations, etc… 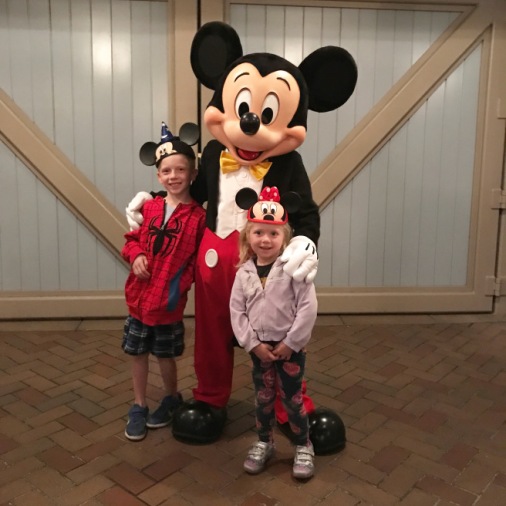 Our children didn’t express much interest in meeting characters – they were just as happy to see them from afar. This means we didn’t have to spend $$$ on character dining because they really didn’t care. Thankfully – all characters that they met, we were able to do so quickly and only had stand in line for five minutes or less. We even ran into Mickey in a dark corner on Main Street (less sinister than it sounds) so we snapped a picture and called it a day – no long line necessary! 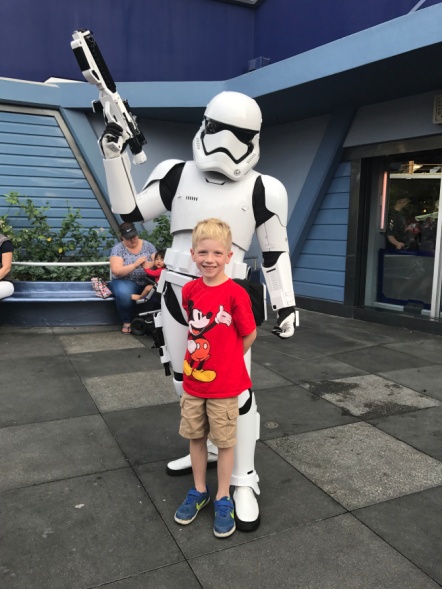 The Stormtrooper was a bit of an asshole, which we loved. The commitment of the characters at Disneyland is unparalleled – we were very impressed! 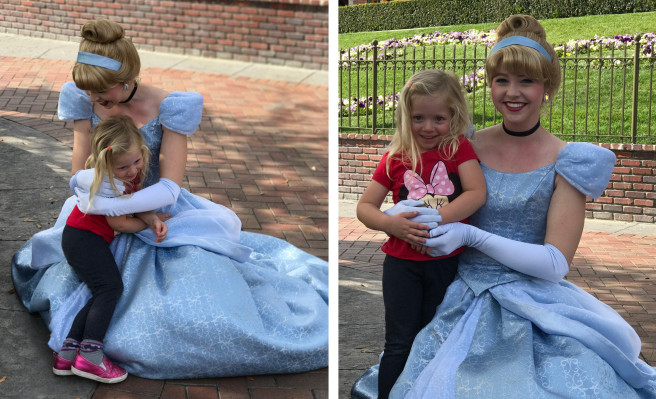 We met Cinderella and were able to see a few more princesses from afar. Violet really wanted to meet Elsa and Anna but we never could find them. And we weren’t willing to drop $80/person for the Frozen dinner show. Violet didn’t seem to mind though…. 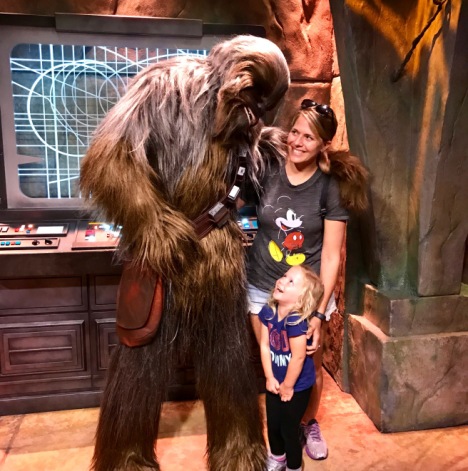 …because her highlight was meeting Chewbacca! Sadly, she was too short to go on the Indiana Jones Adventure ride so I took her to meet Chewbacca while the boys rode it (via FastPass – no standing in line!). We waited about 20 minutes to have a private meeting with him and seeing her reaction was something I’ll never forget. ❤ 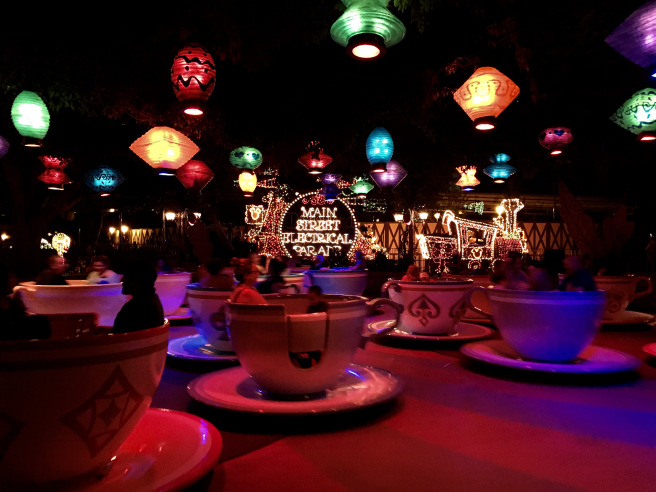 Every night, there is the Main Street Electrical Parade. People start securing spots early – like really early, which is the opposite of how we roll. We timed it so we were in line for the Mad Tea Party and then on the teacups for the beginning of the parade…best seat in the house and we didn’t waste any time stalking spots. We then realized that most people with little kids were watching the parade so we used that time to hit all of the ‘all-ages’ rides in Fantasyland – Mr. Toad’s Wild Ride, Snow White’s Scary Adventure, Pinocchio’s Daring Jourey, and It’s a Small World (we had rode Peter Pan’s Flight earlier). 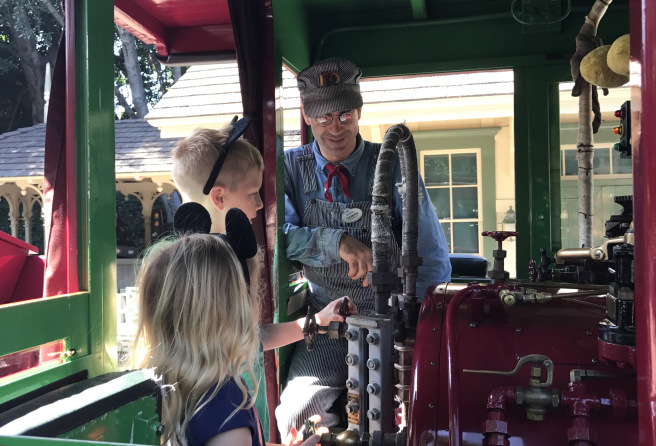 Unfortunately, the Disneyland Railroad was out of commission during our trip but there were very nice conductors that let the kids explore the engine and train cars. 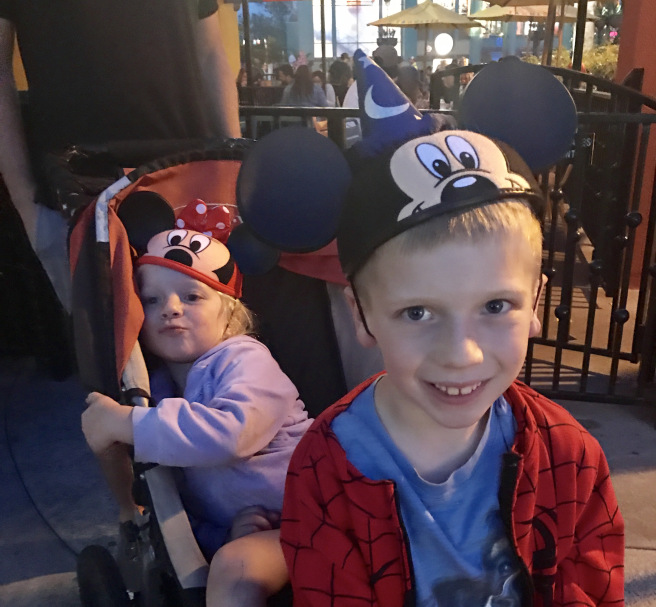 Of course Disneyland is super stroller-friendly – we were amazed by all of the stroller-parking zones and how we were able to leave stuff in our stroller without having to worry about anything happening to it. I’m glad we decided to bring the stroller – it made maneuvering within the park and hotel with tired kids super easy and fast. Both kids fit in a single BOB – no double stroller necessary. 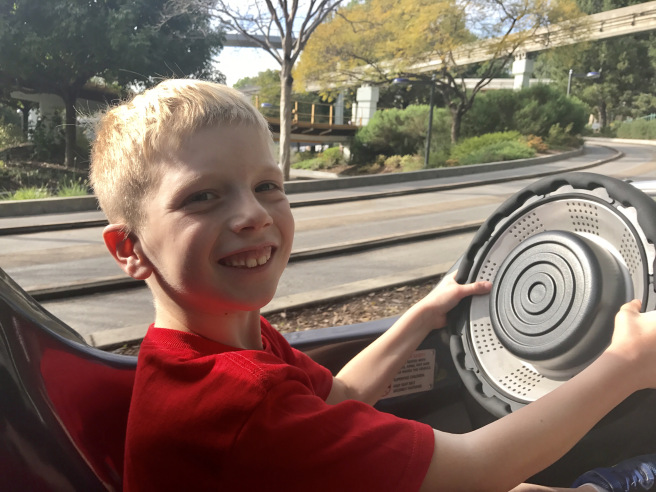 The Autopia ride was a favorite of the kids – we rode it at least once every day. Weston is actually a pretty good driver! 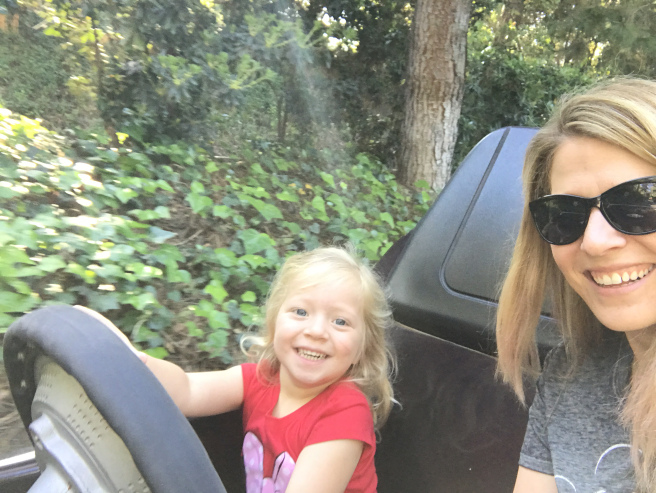 Clay and I would debate over who got stuck being the passenger while Violet was driving…that girl is dangerous behind a wheel! 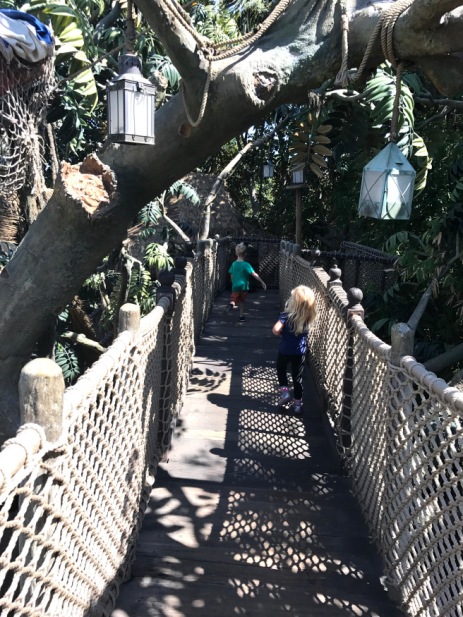 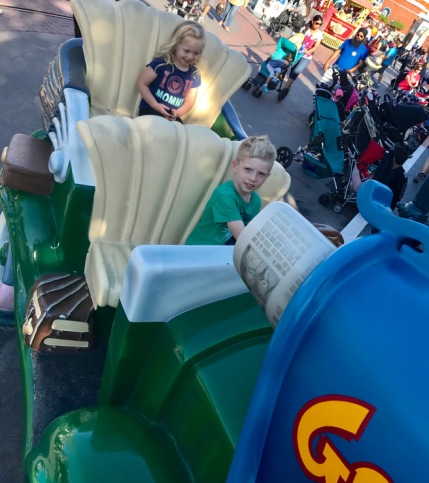 The kids LOVED Toontown. Clay and I did NOT get it…we thought there were so many cooler parts of the park but the kids were smitten. Which reminds me – when we were on Splash Mountain, we could see the construction for Star Wars Land…we are definitely looking forward to either coming back to Disneyland or going to Disney World to experience Star Wars Land. We are now that family. 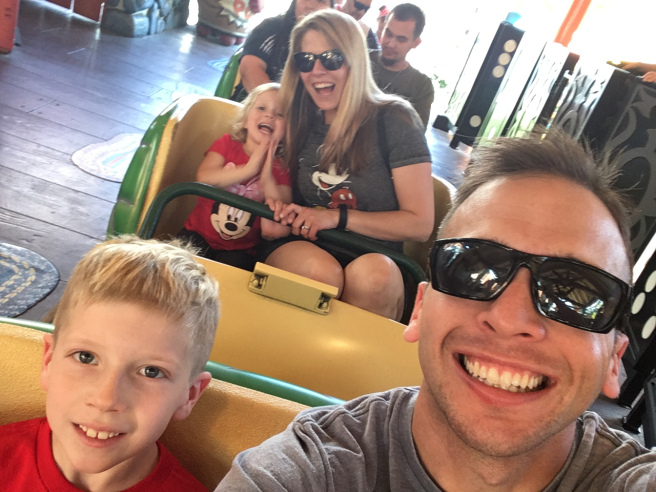 We had such a great time at Disneyland Resort – it really was a magical family experience. And while the kids had the occasional breakdown (they weren’t alone – throughout the park you could hear parents saying “We spent a lot of money – you WILL enjoy this and NOT cry!”), the overall vibe was chill and we were just enjoying being able to experience a place that is about unbridled family fun. 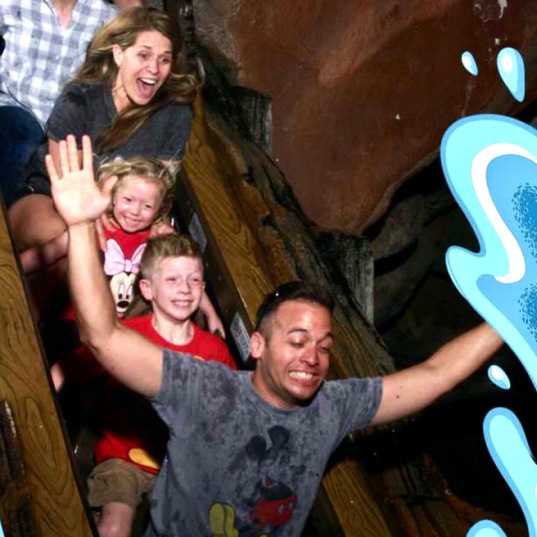 So thank you Disneyland for exceeding our expectations. We’ll be back.

4 comments on “Disneyland – The Happiest Place on Earth” 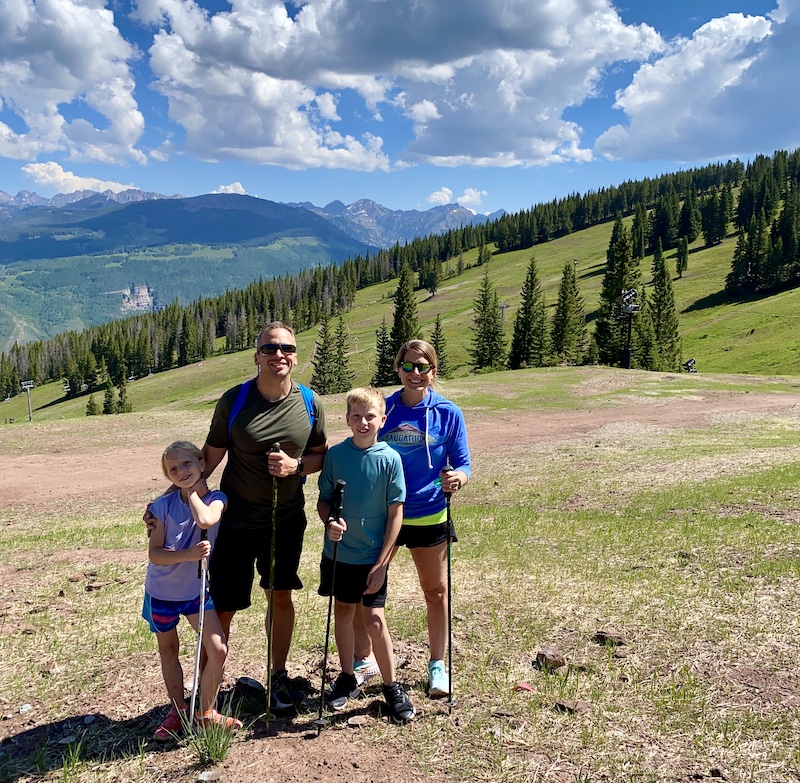 We really enjoy biking in the North Shore - it’s not everyday you get to ride along with a Metra train. #outdooradventures #chicagolandbiking #familybikeride
#futbolislife
You’d be hard pressed to find someone who loves baseball more than this kid. He loves playing the game, watching the game, and studying the history of America’s favorite pastime. ⚾️ #saturdayvibes
Soaking up the last few hot days of the year. #sup #lakemichigansup #chicagoland
Teddy Girl met Rupert this morning on our hike and had an absolute blast frolicking in Lake Michigan with another yellow lab. #labsofinstagram #yellowlabrador #teddygirladventures
She tried a new position today and totally rocked it - just call her Violet ‘The Wall’ Huffman.
We had a morning and early afternoon filled with baseball and soccer - I bet you can’t guess whose team won and whose team lost. 😂
Thursday night lights with the kid using his dad’s catcher’s mitt. ⚾️
20 years ago today I met a cute boy who lived in the same dorm a few floors below me. I think it’s going pretty well. #20years #cheerscocktail 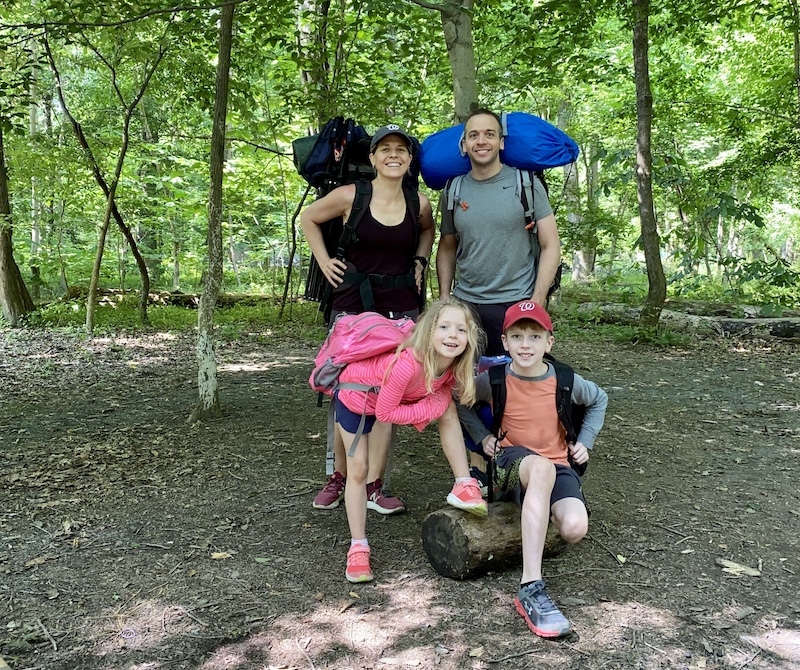 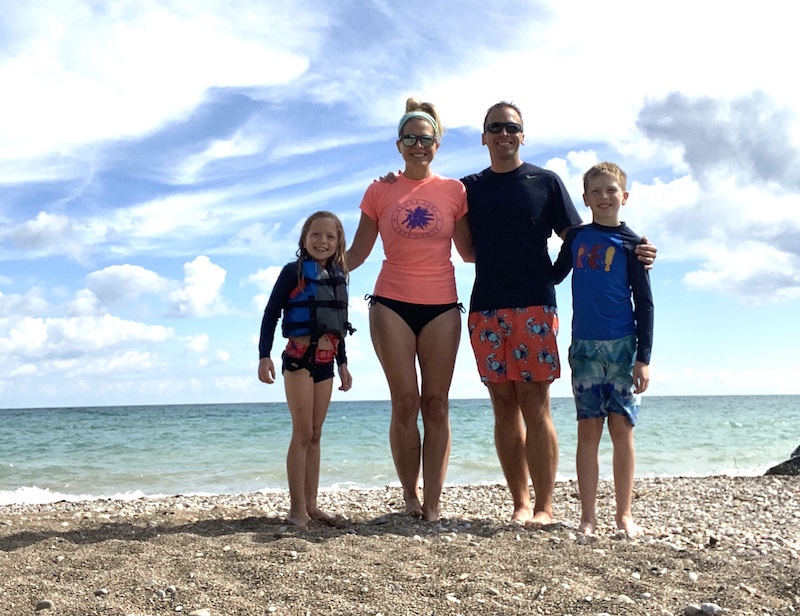 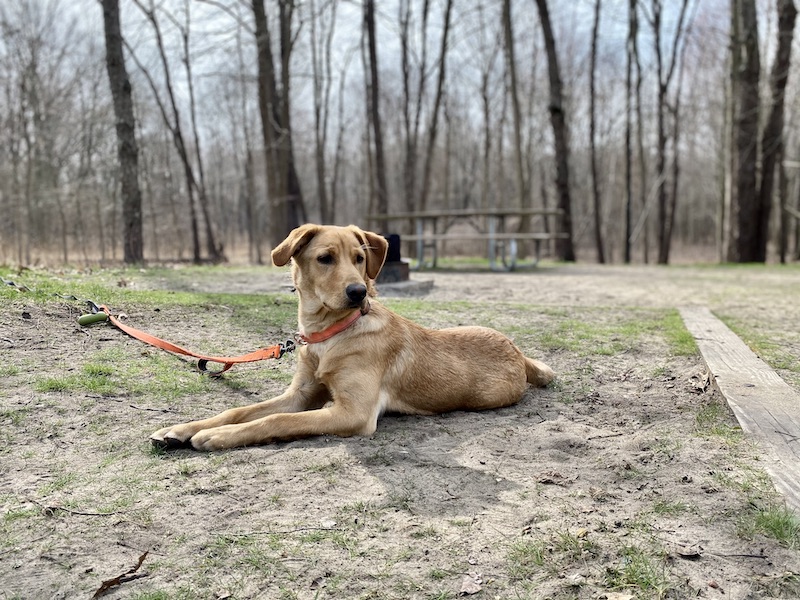 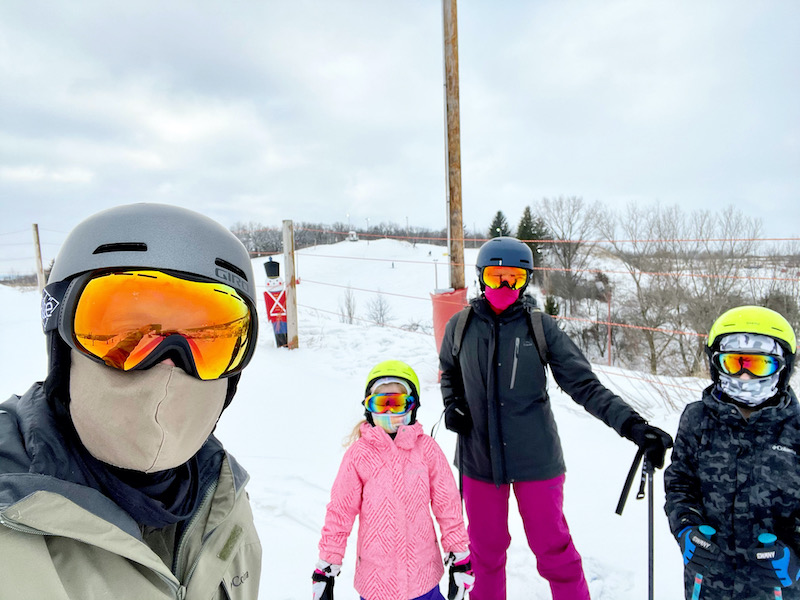 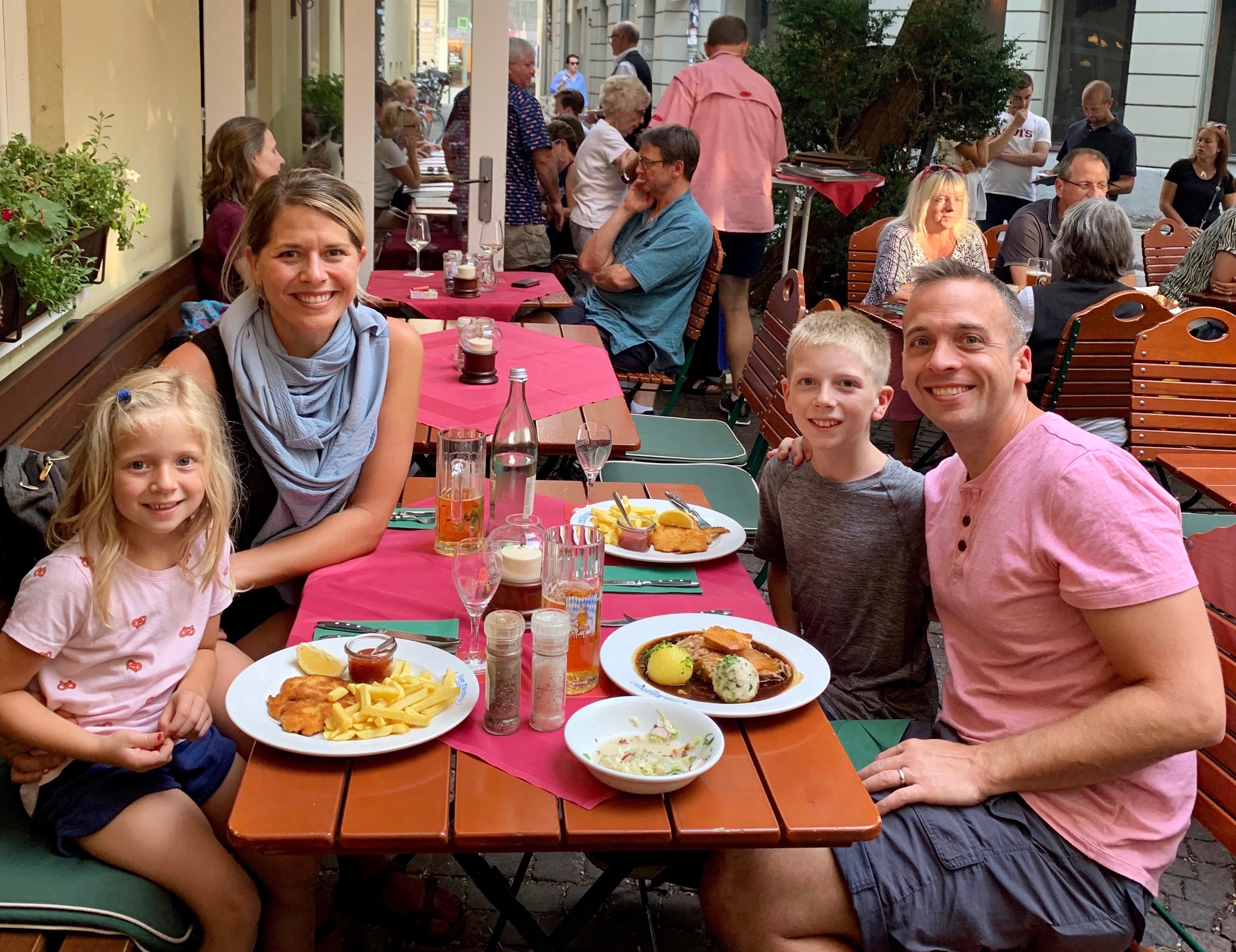 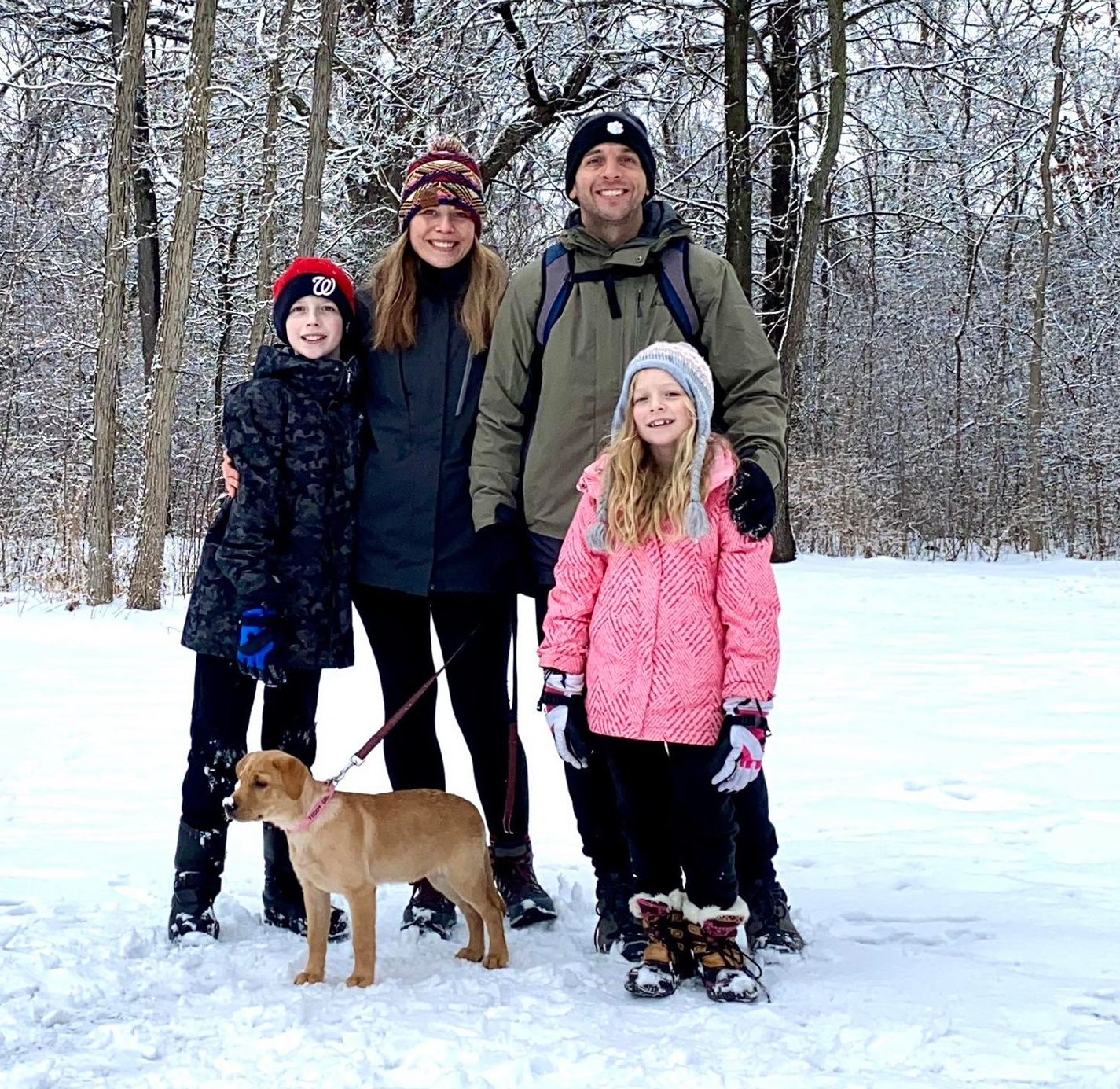