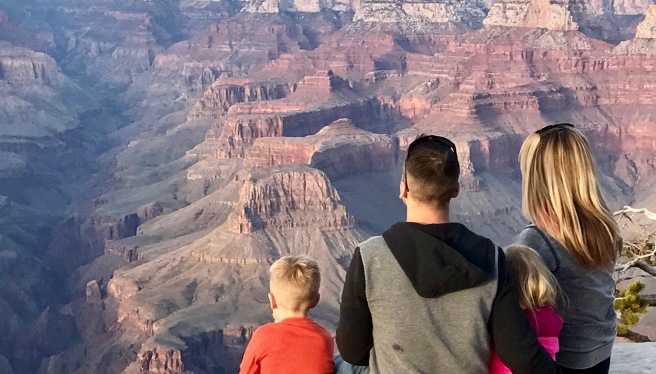 John Wesley Powell, famed geographic explorer, stated back in the late 19th century that the wonders of the Grand Canyon cannot be adequately expressed with words and that graphic art resources are taxed beyond their powers in attempt to capture the magnificence. Despite all of the technological advances that have occurred over the past 100 years, his words still hold true. No matter how brilliant pictures of the Grand Canyon may appear, they fall short to the splendor of witnessing in-person one of the seven natural wonders of this world. 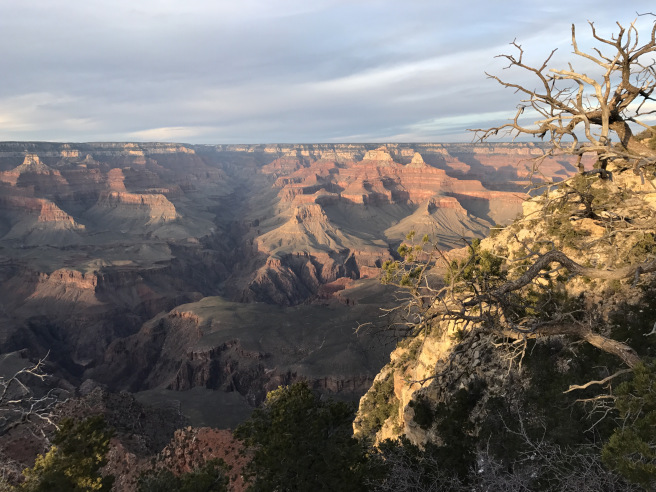 In March 2017, we went on an epic road trip that took us from Texas to California and back. After spending the first night in Albuquerque, we arrived at Grand Canyon National Park mid-afternoon and used our National Park Annual Pass (currently free for military) to gain entry for the evening. We checked into the Yavapai Lodge, dropped our bags off in the room, and immediately made our way to Mather Point, which was less than a mile from our building. 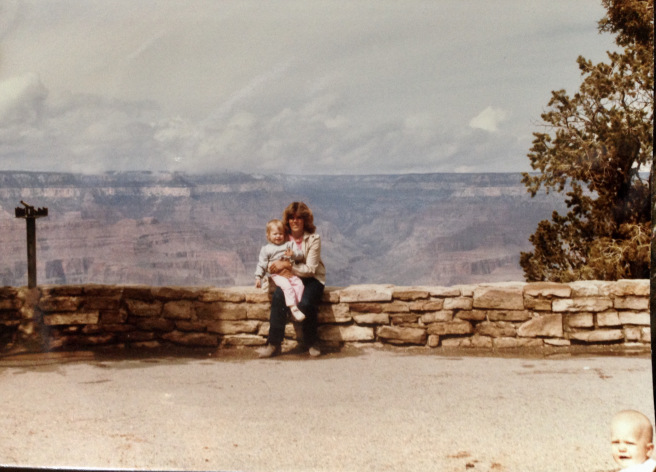 Documentation of my first trip to the Grand Canyon and my mom’s 80’s hair. 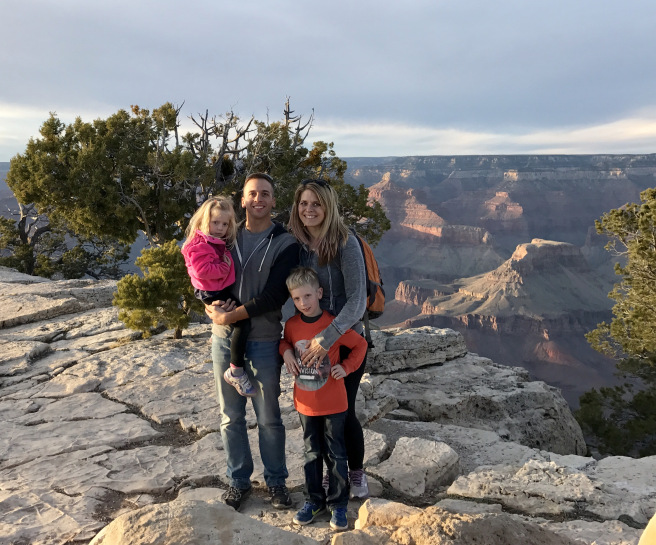 I hadn’t been to the Grand Canyon since I was in grade school so I was excited to experience the park as an adult. It was Clay’s first time, as well as the kids, so we spent the next couple of hours walking around the South Rim – keeping a death grip on the children when we would venture close to edges with no railings. 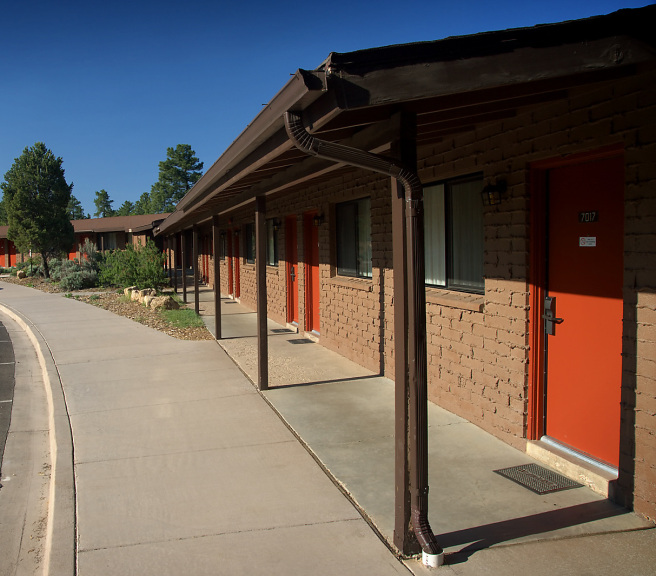 When planning this little excursion to the Grand Canyon, we chose to limit ourselves to the National Park on the South Rim because of the little ones. Clay and I hope to go back again sans children and do a camping/hiking trip down to the river but for this trip, we stuck to the main trails that began at the National Park Headquarters. As mentioned, we chose to stay in the park at Yavapai Lodge due to it’s central location to the kid-friendly trails we wanted to hike. Our room was basic, as were the amenities, but we were sleeping within 1000 feet of one of the most beautiful landscapes in the world so we certainly didn’t mind. 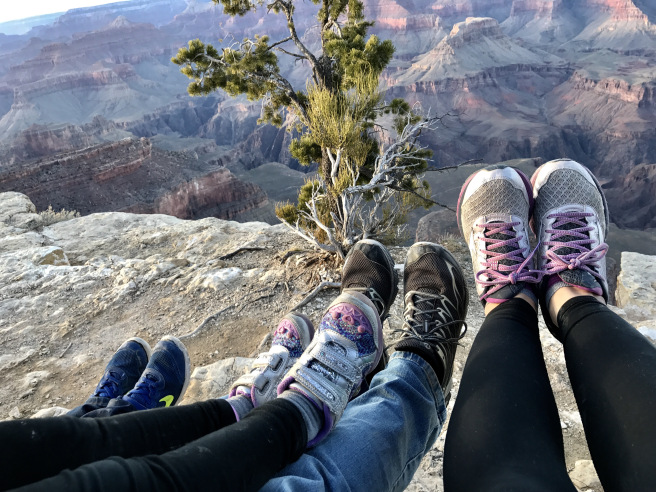 After walking a couple of miles, we sat down along the edge and just soaked in the majesty of everything that enveloped us. The rock pictured under our feet was about three feet below so it made for a nice and safe spot to sit with the kids. 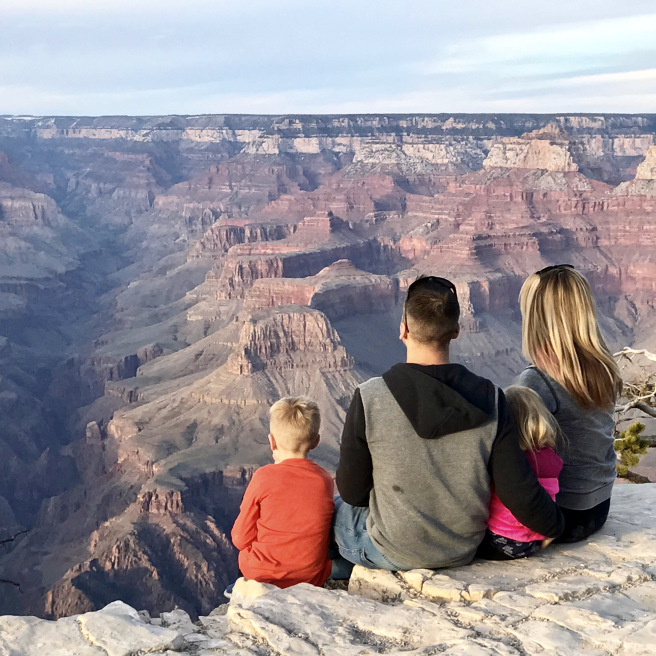 A woman came across us sitting along the edge and offered to take our picture because she thought it was a great shot – we really did feel like we were sitting on the edge of the world. One thing we noticed inside the park was just how there were so many nationalities, colors, races, and creeds represented among tourists. But everyone was nice, smiling, offering to take family photos, and just enjoying being in such a beautiful place. It was a shared experience – one that no one in the park that day will likely forget. This is why the National Park Service is so important, in addition to conservation, preservation, history, and heritage. 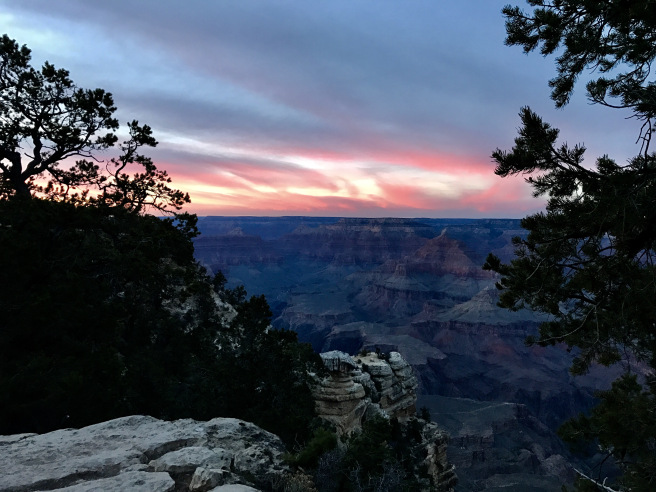 We hiked a little more before settling into a spot to watch the sunset. Before long, the moon shined brighter than the set sun so we decided to grab some dinner in Tusayan, a little (tourist trap) town outside of the park. Our options were limited so we settled on ($8!) cheeseburgers from Wendy’s. Lesson learned – next time we will bring our own food into the park. 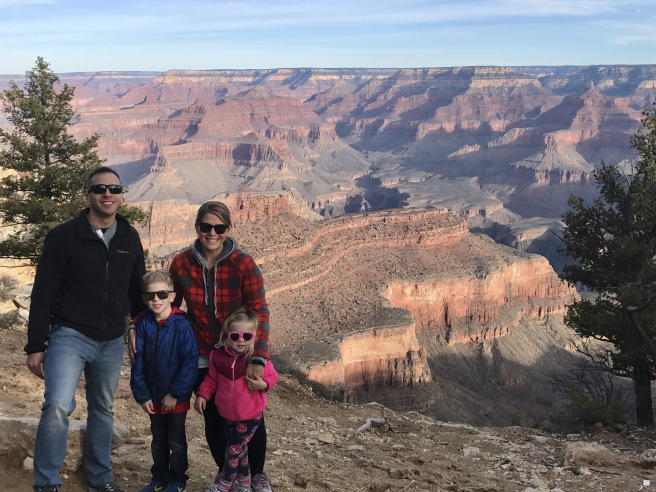 The following morning, we woke up early so we could do a sunrise hike. We were some of the only ones on the trail. That hike was easily one of the coolest experiences we’ve had yet as a family – it felt sacred and will definitely make the highlight reel of our life together. 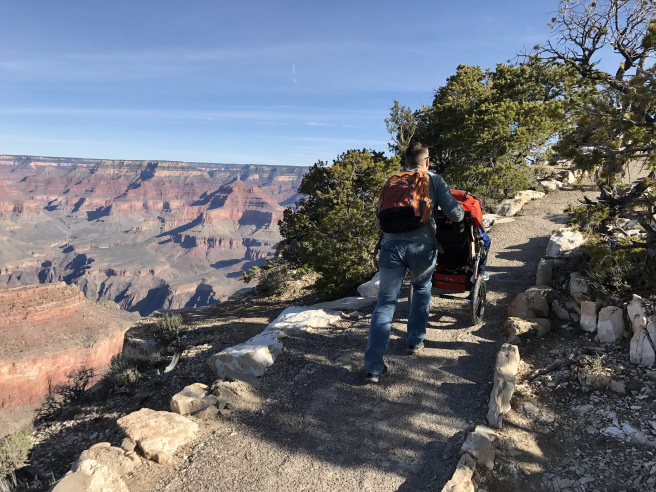 The majority of the trail along the rim is as pictured. We were able to take use BOB stroller, which allowed us to cover more ground because both kids can fit in it when they get tired of walking. 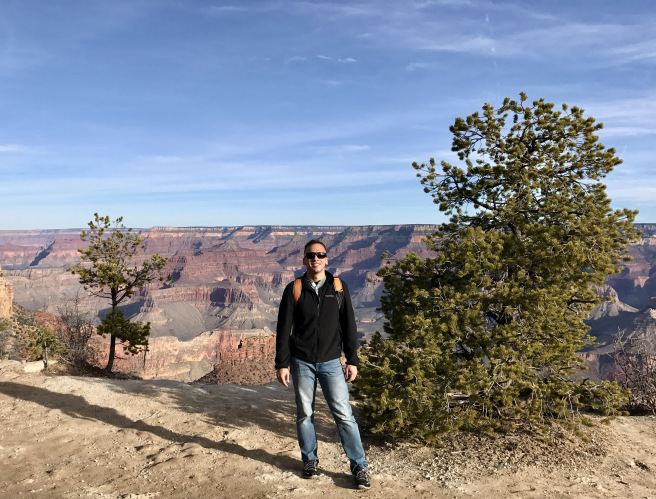 Clay and I took turns walking out to the edge while the other parent stayed further back with the children. About 12 people die annually at the Grand Canyon and we wanted to make sure we weren’t included in that statistic. While we let our children explore and gave them a sense of autonomy in the park, we were safe about it and didn’t put them in any dangerous sitautions. 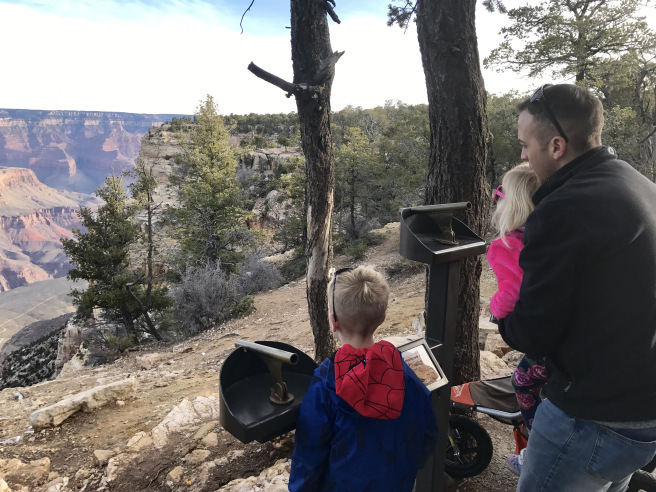 Along the trail, they had these viewing stations that the children loved. They could see the Colorado River, different types of rock formations, and a plethora of other cool things. 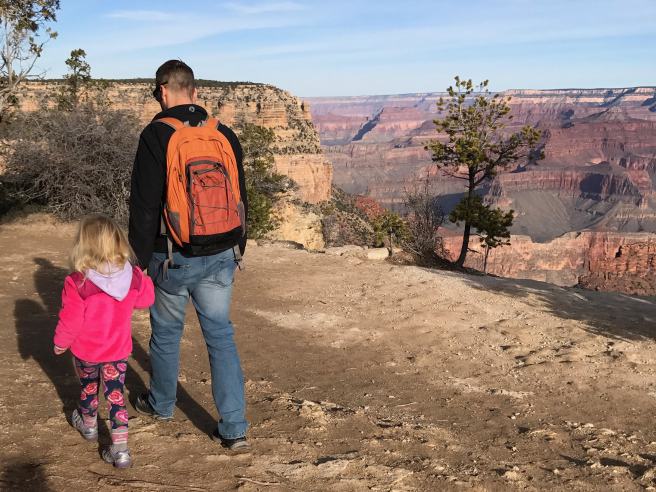 Weston wanted to hike out to an overhang in a place that we weren’t comfortable taking Violet so Clay took her on a little hike in the woods while the little guy and climbed some rocks and hiked over to the point. 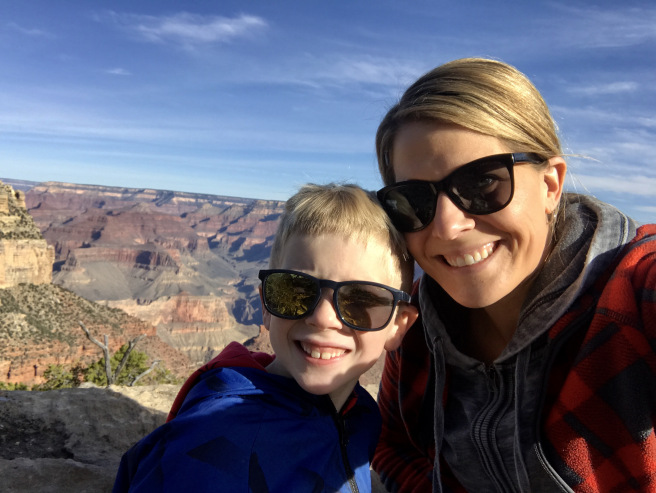 Weston and I sat and talked and on our way back, he turned to me and said, “This was one of my favorite things I’ve ever done with you, Mommy.” Me too, kiddo. Me too. 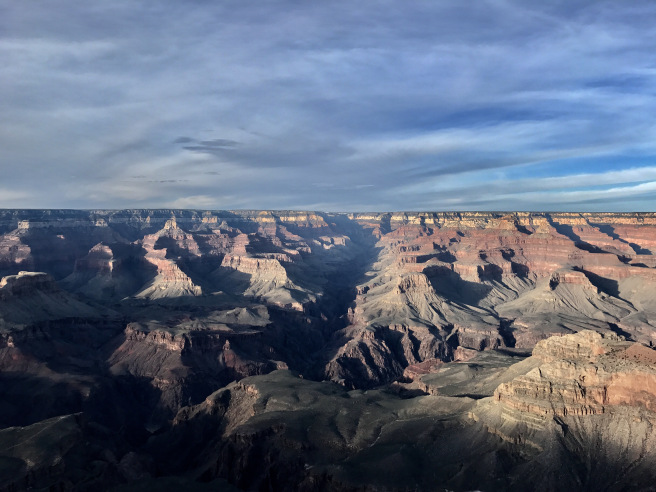 By lunchtime, the trail was starting to get busy so we went back to our room, packed up the car, and exited the park – vowing to return sooner rather than later. We then grabbed a bite to eat at Anna’s Grand Canyon Coffee & Cafe in Williams, Arizona. And then we were on our way. Next stop – Las Vegas!

6 thoughts on “The Grand Canyon”

This is 38. The past year was filled with personal and professional triumphs as life changed into a shell of what we’d previously known. There were a lot of lessons - many difficult to digest. But I emerged better than before. Only time will tell what the next 365 days have in store for me but all signs are pointing to the spring and summer being the best yet. 💪🏻 #moveyourbody #breakasweat #letsgo #brighterdays #birthdaygirl
The @chicagotribune had a column today about apricity, a rare word that means the warmth of the sun. It has been a gorgeous weekend with above average temperatures so we’re spending as much time outside as we can. I can’t wait to see what spring will bring. 😍
It was too warm to ski today (we’re NOT complaining) so we opted for a hike in the woods instead. #optoutside🌲 #winterhiking #snowhike
Better late than never. Taco trio from last weekend - the fish taco was my favorite.
After a bitter cold and snowy February, we’re ending the month with unseasonably warm temperatures and melting snow. #lakemichigan #thirdcoast #sunset
Teddy Girl sure does love being stationed on Lake Michigan (so do we!). ❄️ #labsofinstagram #puppiesofinstagram
I am my own worst critic and have been known to put mind-numbing pressure on myself to accomplish things that don’t matter much at all in the long run. I wrote about how my body told me that I needed to slow down but I know that is easier said than done (link in bio). Does anyone else out there struggle with feeling like they’re not living up to their potential? #listentoyourbody #strugglebus #brighterdays
It’s a cozy Friday night around here. #bff #animalsonfurniture
🎶 It’s beginning to look a lot like Fort Drum, everywhere we go...”. The drifts are taller than us! #chicagolandwinter #winterwonderland