Back in October 2015, we were stationed at Fort Leavenworth and making the most of our Army-sponsored time in eastern Kansas. However, we were beginning to feel the effects of living in a land-locked flat state with no large bodies of water nearby. So when I casually mentioned to Clay that Colorado Springs is only an 8.5 hour drive from Fort Leavenworth, the lure of the Rocky Mountains was enough to gloss over the idea of spending 17 hours in the car during a 72 hour weekend. And before we knew it, we planned a quick trip to Colorado Springs!

I-70 stretches across Kansas for 424 miles. For approximately 420 miles of the trek, the landscape looks exactly like above. Exits are far and few between, especially in the dark of night. Despite not leaving until 5pm, we managed to drive through Kansas before checking into a hotel around 11pm (we gained an hour going from central to mountain time zone) in Burlington, Colorado, a small town just over the border. 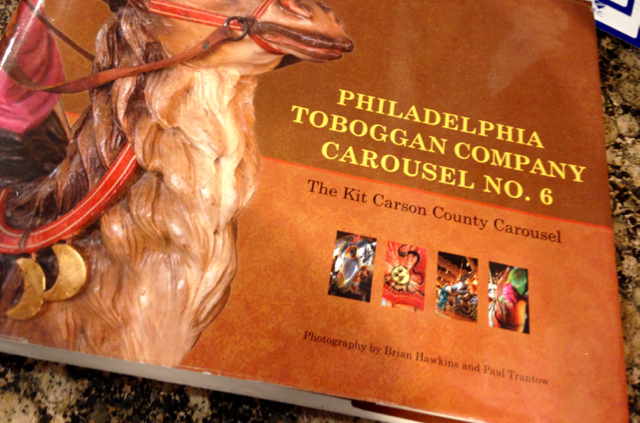 Before Friday night, we were unaware that Burlington, Colorado is known for the Kit Carson County Carousel, the only surviving menagerie by Philadelphia Toboggan Company Carousel. Our hotel was overwhelmingly decorated with carousel details and greatly advertised it’s proximity to the museum. The Kit Carson County Carousel is the only antique carousel in America that still has the original paint on both the scenery panels and on the animals. In other words – it’s kind of a big deal to those interested in the antique carousel world, of which we are totally not card-carrying members. At breakfast, I’m pretty sure we were the only people not in town for the carousel (we were also the youngest by about 40 years) and I think I heard carousel music as I drifted off to sleep (Clay did not – he can sleep through anything – a perk of having gone to war, I suppose).

By 9am, we were back on the road and excited for the two-hour drive to Colorado Springs. In case you were wondering, eastern Colorado looks exactly like western Kansas. Not a mountain in sight. Womp. Womp. 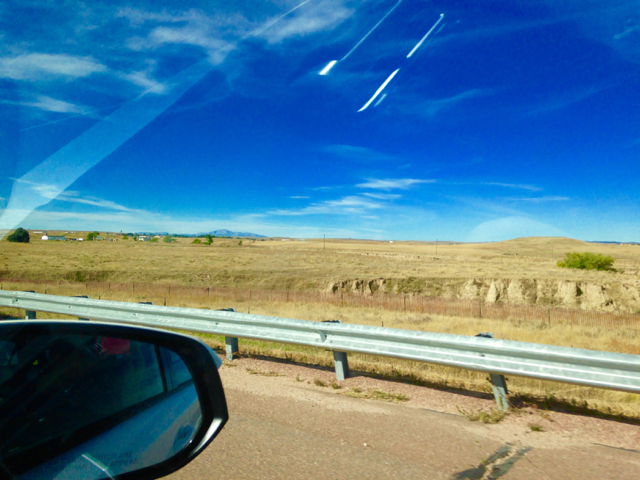 Woohoo! Our first mountain sighting occurred about 60 miles outside of Colorado Springs. We kept our eye on the prize as we finished the last stretch of the drive – positively giddy after experiencing almost 500 miles of flatland.

Situated on Fountain Creek, Colorado Springs is 6,035 feet above sea level (with varying levels throughout the city) and positioned near the base of Pikes Peak (known as America’s Mountain). Pikes Peak is on the eastern edge of the Southern Rocky Mountains and is the second most visited mountain in the world, after Mount Fuji in Japan. Since we knew we were going to spend the rest of the afternoon hiking in Garden of the Gods, we grabbed lunch at Phantom Canyon Brewing Company. Not only were the beer and food good, the restaurant was extremely kid-friendly as well.

Garden of the Gods is a public park owned by Colorado Springs that hosts breathtakingly beautiful red rock formations that were created during a geological upheaval along a natural fault line millions of years ago. Popular with rock climbers, hikers, and even those just wanting a leisurely stroll, Garden of the Gods has more than 15 miles of rugged trails and a 1.5 mile paved trail that winds through the heart of the park and the most iconic formations. 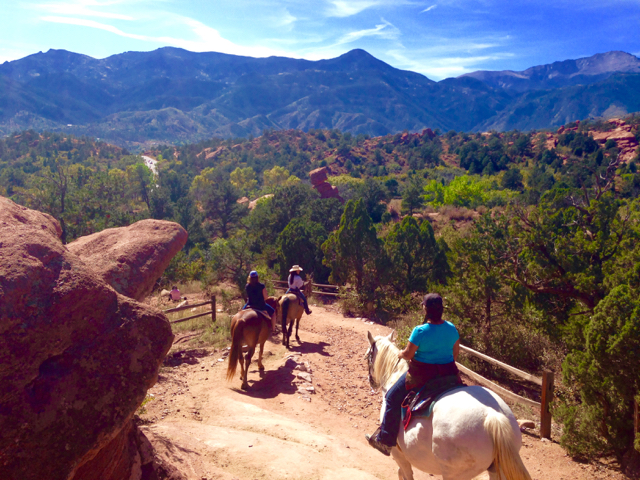 We opted for a more rugged trail because we wanted to climb as many formations as we could (totally encouraged!) and keep away from the tour groups. When we first started, we passed a group on horseback – when the kids are a little older we will definitely partake in such activities but for now, hiking is much more our speed. 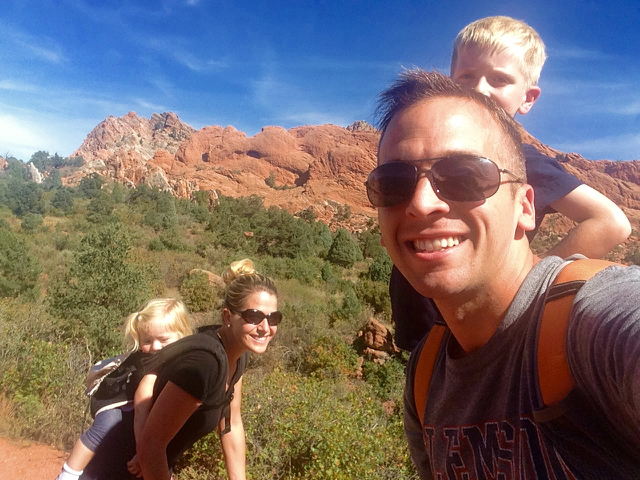 Unfortunately, we realized we forgot our Kelty about 200 miles into the trip but thankfully we always keep the Ergo in the car. I carried Violet on my back for the majority of the hike and Weston was a rockstar climbing and keeping up with me and Clay on the trail.

Because the weather was perfect, there were many rock climbers on the formations. As long as climbers register with the Visitors Center and have proper gear, climbing is allowed in the park. We did our fair share of climbing as well because it is pretty much impossible to pass a bunch of giant boulders without giving into the urge to climb them, even while wearing a toddler strapped to your back.

The little guy was super thrilled to have climbed this formation all by himself.

We couldn’t have asked for a better afternoon in the Garden of the Gods. We spent close to four hours exploring the park doing one of our favorite family activities – hiking in the fresh air. While driving almost nine hours one-way just to see mountains over a three-day weekend may seem extreme to some, it is extremely important to us to show our children as much as the country (and the world) as we can. During our hike, I was reminded of a favorite quote by Frank Lloyd Wright – “Study nature, love nature, stay close to nature. It will never fail you.” I can only hope that as parents, we foster an environment that encourages our children to be students of nature. After an afternoon of hiking, we checked into our hotel and grabbed dinner at a cute little Italian restaurant.

The next morning, we went to Manitou Springs, which is the epitome of a mountain town with unique shops, historic homes, and incredible views. There is also a penny arcade, various mineral springs, and annual events that fall on the eccentric side – such as the Fruitcake Toss. It is a popular destination because of it’s location at the foot of Pikes Peak. We grabbed a cup of coffee at Red Dog Coffee and walked around the town until it was time to head to the train station.

We knew hiking to the summit of Pike’s Peak was out because our children are young so when we learned about the Pikes Peak Cog Railway, we knew we found our source of transportation up the mountain. I purchased our tickets online (we had the option for Violet to sit on our lap but opted to buy her a seat to give us flexibility – well worth the $20 in our opinion) the week prior because trains can sell out before the day of departure.

The seats are designed to face toward each other in groups of six (three on each side). We sat next to an older couple from Denver – our assigned seats were the closest four to the window but there really isn’t a bad seat on the train because the windows are so large. Before long, we were on our way up!

Colorado has 54 mountains over 14,000 ft. Pikes Peak ranks #31 at 14,115 ft. and is the highest summit of the southern Front Range of the Rocky Mountains. The mountain raises 8,000 ft. above downtown Colorado Springs (the city is already 6,000 ft. above sea level). So while we were over 14,000 ft. at the summit, the train itself only ascended less than 8,000 ft. The Pikes Peak Cog Railway has almost 9 miles of track and the railway itself is the highest in North America, which means that the views on the way up (and down) were outstanding. 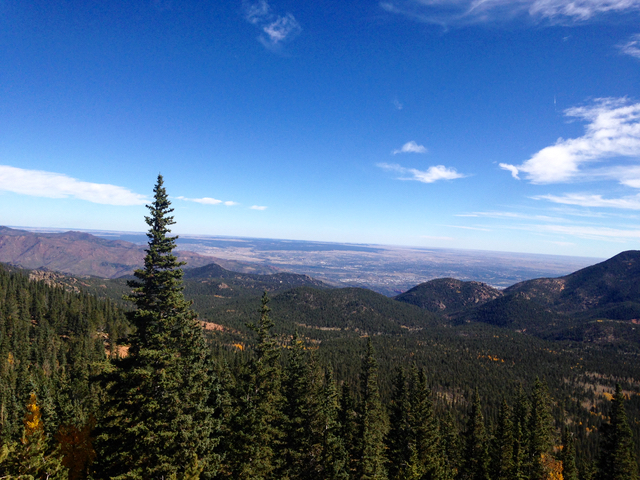 When we went to Alaska, I was disappointed to find out that the majority of the pictures I took failed to capture the majesty of the mountains. Unfortunately, I feel the same way about the pictures taken this trip so please understand that the following pictures to do justice to the majesty of Pikes Peak. The majority of Colorado Springs falls in the Eastern Plains Zone, which extends up to 6,000ft. Pikes Peak encompasses four distinct life zones – the Depot (6,000 – 8,000ft), Montane Zone (8,000 to 10,000 ft), Subalpine Zone (10,000 to 11,500 ft), and Alpine Zone (11,500 ft. and above). It was really cool to see changes that accompany each distinct life zone on our ride up the mountain.

Pikes Peak has a clear tree-line at 11,5000 ft because the Alpine Zone (tundra) does not contain trees because of it’s high altitude. The lack of the greenhouse effect at such high altitude causes the cold climate in the alpine tundra. As soon as we reached the Alpine Zone, there was a noticeable temperature drop. While the weather was 80 degrees in Manitou Springs that day, the temperatures hovered around 30 degrees at the summit. Pikes Peak is home to one of Colorado’s largest bighorn sheep herds and we were able to see a few on the ride! Unfortunately, there were too far away to show up in a picture taken with my phone.

When we reached the top, we had about 30 minutes to walk around and explore before needing to board the train for the decent. We bought round trip tickets but hikers have the option to purchase one-way tickets – either for the decent or ascent. Some people were grumbling at the lack of time at the summit but for us with two young kids, it was the perfect amount of time. At the peak, the partial pressure of oxygen is only about 60% of that at sea level. 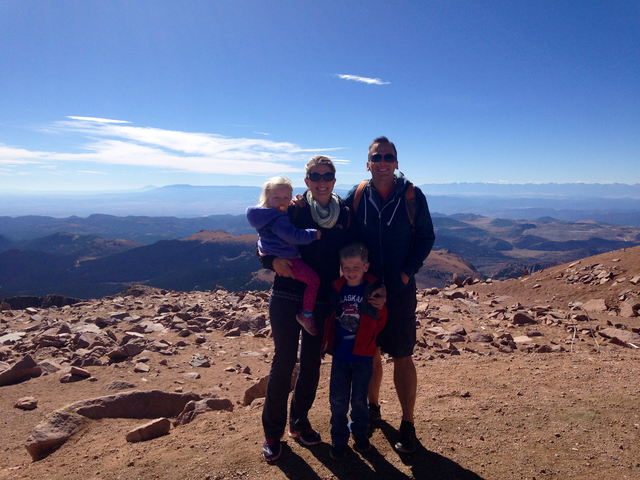 From the top, you can see up to five states on a clear day (Colorado, Kansas, Oklahoma, Wyoming, and New Mexico). Views are to be seen from every direction – Garden of the Gods, the Continental Divide, various reservoirs, and summits of other peaks.

We walked all around up top. There is a gift shop/restaurant at the summit but we didn’t waste our limited time visiting there other than to use the restrooms. We came for the views – not subpar food and cheap souvenirs.

The Army is everywhere. Ha.

Violet was no match for the high altitude.

And then continued to sleep the entire descent. Weston joined her shortly after boarding. We’ve discovered our children’s kryptonite – altitude!

If you’re wanting to go to the top of Pikes Peak and unable to hike/unwilling to drive, I highly recommend the Pikes Peak Cog Railway. The experience did eat up a large chunk of our day but the opportunity to soak in views at 14,000+ ft. made it worthwhile. While we did enjoy the train, Clay and I do hope that the next time we’re on top of Pikes Peak, we’re there because we hiked the 13 miles trail ourselves.

Colorado continues to be a place that we hope the Army will send us someday. And even though we didn’t spend much time there, we were there long enough to know that we’d be very happy nestled within the southern Rocky Mountains. It doesn’t take much to fall in love with Colorado and we looked forward to the next time we’re breathing in that crisp mountain air.